The World Cup in Brazil has seen 127 goals in the first 44 matches. That is one of the highest averages of all World Cups. And when there are almost 3 goals being scored on an average every match, it is but natural that such a tournament would be a goalkeepers graveyard.

Goalkeepers are more often than always the target of ire when a team loses. But the 2014 World Cup has shown that equal amount of praise is showered upon them for putting in their best.

Before the tournament started names like Casillas, Buffon, Neuer and Courtois were being discussed among all football circles. They were expected to man their posts vilfuly and not let anything through. Some of these heroes have turned into villains, while some are yet to make a mark.

While the ‘Stars’ continue to remain in oblivion, a few keepers have dived and jumped their way into the limelight. The prime examples being Guillermo Ochoa (Mexico) and Alexander Dominguez (Ecuador).Ochoa ensured that his side’s clash against Brazil ended in a goalless draw, while Dominguez pulled off a similar feat against France.

Ochoa won the league title with Mexico City side America in 2005 before moving to France in 2011. He has been linked with a move to Olympique Marseille.

Ochoa took the world by surprise when he ‘flew’ across the lengths of his post and denied goals to Neymar, Oscar and the rest. He put up another herculean effort against Croatia and conceded just one goal as Mexico won the game 3-1.

Enyeama captained Nigeria to the 2013 African Nations Cup title. He was named the best player in the Israeli league in 2009 and moved to France in 2011. He currently plays for Lille.

Vicent Enyeama of Nigeria had managed to keep a Clean sheet for 183 minutes before he face the ‘Best Player in the World’ Lionel Messi. He made 17 saves in the three group stage matches that Nigeria played. Had he let go even 1/4th of those chances, Nigeria probably wouldn’t have advanced to the Round of 16.

Dominguez’s above average 1.93m height for an Ecuadorean singled him out as a potential goalkeeper from an early age. He was instrumental in LDU Quito, his only club, winning Ecuador’s first Libertadores Cup in 2008 and Copa Sudamericana in 2009. He comes from an extremely poor background and has worked on a farm, as a waiter, bus ticket conductor and house painter to help his mother.

During the France-Ecuador game, the commentator said “France should have scored at least 7-8 goals in the second half itself by now,” when the scoreline read 0-0 goes on to say tonnes about the way Dominguez manned his post. 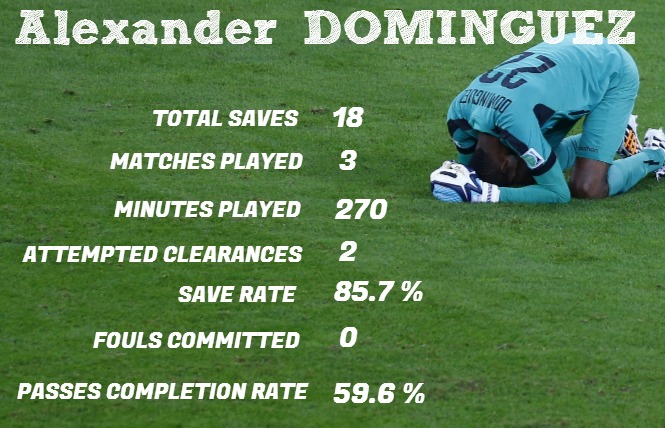 Iker Casillas, who led the defending champion’s Spain, became the butt of all jokes on twitter after one game against Netherlands where he conceded 5 goals. He went on to concede a couple more against Chile, before he was dropped in Spain’s last game against Australia.

It will be interesting to see how these ‘Super Goalies’ fare up in the knockouts.