The cash-strapped Indian ice hockey team has so far managed to raise a meagre Rs 7 lakh with only a week to go before the Asia Cup in Kuwait. And it is clearly not enough for the players in the cricket-mad country. 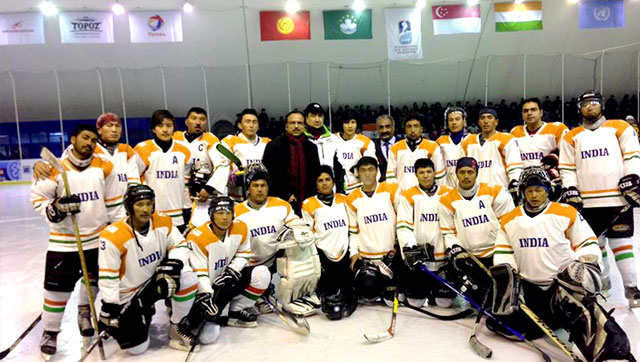 The hashtag #SupportIceHockey started trending in India and entrepreneurs like Anand Mahindra have taken notice.

The national team says the sport receives government funding only to attend the Olympics or the Asian Games, and the players don’t have the money to travel or for their gear for the International Ice Hockey Federation Challenge Cup.

Vedank Singh, the digital marketing head of the Ice Hockey Association of India who launched the crowdfunding campaign on Saturday using the Twitter hashtag #SupportIceHockey, said the team does not have even “basic facilities”.

Vedank, who tweets with the handle @bhaiyyajispeaks, came up with the idea of going to people for funding as there was lack of sponsors.

The hashtag #SupportIceHockey started trending in India and entrepreneurs like Anand Mahindra have taken notice. Mahindra, the head of the $16.5-billion conglomerate Mahindra Group, tweeted that he had “decided to support these passionate athletes”.

“Many influential people have come forward to support us but the team is still awaiting its first sponsorship contract. Even Mahindra called us up and assured of support after he noticed the tweets,” Vedank told HT.

But the team still needs more money to fund their entire trip to the tournament.

“We have already booked the tickets worth Rs 12 lakh and paid the amount using our credit cards. That is the bare-minimum we need in order to reach the tournament venue. The players also need funds to buy new equipment, as they have been using the same sticks, gloves and pads for the past 5-6 years,” says Harjinder Singh, general secretary of the association.

“We are definitely going to participate in the tournament whether we find sponsors or not,” adds Singh.

It is so tough to push sports like Ice Hockey when cricket takes up all sponsor budgets. We have a national team and are begging for money.

Concerns for the future And even as efforts are on to raise funds for the game through crowdfunding, the future of the team is a bigger worry for the association. The national team, which registered its first international victory by beating Macau 5-1 at the Challenge Cup of Asia (CCOA) in 2012, has been practicing at iSkate, an ice skating rink that is 1/3rd the size of an international one in a Gurgaon mall. “The open rinks in Leh-Ladakh region are bigger in size but CCOA tournaments are held in March-April when there is no ice in Leh. So, we are forced to practice in smaller indoor rinks,” says Harjinder. India has only one rink in Dehradun that is the size stipulated by the International Ice Hockey Federation. But it is lying defunct. Ice hockey is relatively unknown on the sub-continent, although forms of the game have been played for decades in parts of the Himalayas.

We demand our share of love, because be it Cricket or Ice Hockey,The association of tricolor shall be respected everywhere #SupportIceHockey — Ice Hockey India (@icehockeyindia) April 3, 2015

In the early ’70s, Ladakh Scouts – a battalion of the Indian Army – picked up the game which was introduced in India by the British, who introduced the sport in Shimla. The game has slowly, but steadily, gained popularity amongst the troops.

The ironic part is that the gear for ice hockey is still not available in Ladakh. Most locals ask their friends or relatives living outside the state to send them skates.

Due to the lack of accessible equipment, Ladhakis began to improvise with the first teams obtaining ice skating blades from Shimla, the only place in India where ice sports gear is readily available, and nailing them to army ammunition boots. Roller skates and ground hockey sticks were also used. To create pucks, locals cut the thick, rubber heels of army boots into a rounded shape.

Goalkeepers wore ground hockey pads but lacked helmets; neither helmets nor knee and elbow pads were used by other players. Despite injuries due to lack of protective gear, the game has continued to grow in popularity in the region.

The national team now mainly has army jawans from the Ladakh Scouts, Indo-Tibetan Border Police and locals playing for it.

‘My father forced me to quit’

Tsewang Gyaltson, who was declared the captain of the Indian team on Wednesday, took admission in a college in Dehradun with the prospect of polishing his trade at the then newly opened rink there.

His parents made him quit the sport as they wanted their son to have a secure future.

“My parents forced me to quit the sport for a while. But, I started playing again after moving to Dehradun. I still study in Dehradun, but there is no rink for me to play there,” says Gyaltson.

One of the keepers in the team, Rigzin Dorjuy says he’s fortunate to be a part of ITBP, which arranges for his gear.

“My pads are worth Rs 1.2 lakh and the shoes came for Rs 36,000. Some of the boys on the team play with rented equipment,” says Dorjuy.

Their coach Adam Sherlip believes it is very important for these players to be able to make their living out of the sport. The government should ensure that there is a year-round development program in place, he says.

Sherlip, who also doubles up as a physio, says, “These boys are very passionate and it’s fun coaching them. This is just my way of giving back to the game that I love.

“India happened to me by chance. I was coaching a New York team and when we came to play in China, I came across Ladakh.”

Sherlip scouts for young talent in Leh-Ladakh and also runs The Hockey Foundation which provides training and equipment to young kids.

Hakim Giri, the assistant coach is a physical education teacher in Ladakh, who dons the coaching coat every time the team needs him.

The sport is picking up in states like Maharashtra and Himachal Pradesh. The nationals also see participation of teams from Chandigarh and Delhi.

“Maharashtra have been participating for the past 2 years. Their players practice in the skating rink in Essel World,” says Harjinder.

Even after three years of the national team’s impressive win against Macau, the Union sports ministry is yet to notice its achievement.

The ministry gives a meagre Rs 1 lakh for conducting national championships once a year. Not only is the amount paltry to host such an event, arranging air transportation and stay in Ladakh for the participating teams also becomes a task.

And Ladakh Scouts provide accommodation to the participating teams.

Please support our Ice Hockey team travelling to Kuwait. We need to raise funds for the team. A 20k donation will cover costs for 1 player.

So now it’s time enough for all sports enthusiasts to shower a little love on the team and add a little more to their funds here: https://www.bitgiving.com/project/index/id/BIT166