Chennai :The Chennai Heat 2013, the most elite tournament of Ultimate Frisbee was held in Besant Nagar last week. Airborne beat the defending champions Stall 7 in the finals on Sunday. 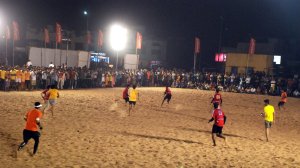 This was the sixth edition of the tournament and was organised by Ultimate Players Association of India (UPAI). It featured 23 teams from Hyderabad, Coimbatore, Kerala and Bangalore, apart from 10 teams from Chennai.

Ultimate Frisbee is an exciting, non-contact, co-ed team sport which mixes the best features of sports such as Soccer, Basketball, American Football and Netball into an elegantly simple yet fascinating and demanding game.

Ultimate Frisbee is played on a rectangular field with two end zones, one at either end. Teams score a goal by passing the disc amongst themselves and receiving a catch in the opposite end zone. However, players are not allowed to run with the disc.

Chennai is the hub of Ultimate Frisbee in India with Elliot’s beach being the mecca. “This is a very young sport. In India , people were introduced to it only 7 years back. Chennai , Kodaikanal , Pondicherry, Ahmedabad, Bangalore, Bombay and Delhi are the only cities where it is played currently. But the popularity is picking up at a very rapid rate. We will soon see a professional league like the Major League Ultimate of US,” said Karthik Narayanan , Chief Organizer and Director of the Chennai Heat. 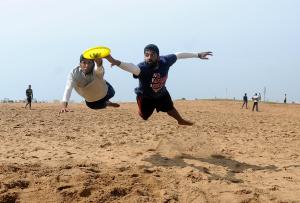 Thrills and Frills : Accompanied by Chills

This sport is often labelled as a ‘child’s game’ by many critics. “If people play the sport once, they’ll realize that it’s like any other sport,” said Karthik. He expects Ultimate Frisbee to be a part of Olympics in the next 10 years and also expects India to win a medal.
“This year we had so many people who turned up to watch the tournament. It is every sportspersons dream to play in front of an encouraging crowd,” said Vishnu , a member of the team Stall 7.

Four teams of Chennai have undertaken a noble initiave of training slum children in the sport. This is being carried out in support with the NGO Pudiyador.