.Carlsen getting his World Championship trophy! A historic day! @SusanPolgar @Rameshchess closed out the commentary. pic.twitter.com/5bhclLis21

“I’ve learnt from Anand but I think I showed him in a way that although he has taught me many things in the past, now it’s probably my turn to teach him.”

But these statistics do not in any way capture the true persona of the legend that is Vishwanathan Anand. “I am very sad that Anand lost today. He is my Favourite,” says 13 year old Nikhil, a budding chess player who has come to Chennai to watch the World Chess Championship Match between Vishwanathan Anand and Magnus Carlsen.

Most of the Chess enthusiasts across the country share a similar sentiment. Anand has won 4 World Championships, he’s been the numero Uno etc… He has won everything that the sport has to offer.

But his greatest achievement has been that he’s single-handedly made Chess popular as a sport in a nation of over 100 billion cricket crazy citizens. The sport which took birth in India as ‘Chaturanga’ is today avidly played and watched in the country chiefly due to the contributions of this One man.

“Vishy (Vishwanathan Anand) has already influenced an entire generation of Chess players. He’s probably the best sportsperson that India has produced after Sachin Tendulkar,” says Tania Sachdev, an International Master who was commentating during the match.

India has had a rich tradition of not excelling at individual sports. Exceptions to this have been very rare. Ramesh Krishnan, Vijay Amritraj and Leander Paes become known names in the tennis circuit, but couldn’t reach the coveted top position. So was the case with shuttlers Pullela Gopichand and Prakash Padukone. Athletes like Milkha Singh , P T Usha and Paan Singh Tomar won some medals at competitions that mattered. But, such cases are very rare, and if we narrow this list down to people who have attained the ‘pole’ position in their respective sport and have had a prolonged stint at that position – we are left with just 1 name – Vishwanathan Anand.

He became India’s first Grandmaster (GM) at the age of 1988. He was also awarded the Padma Shri that year.
Anand first qualified for the World Championship candidates’ match in 1991. He was a just a rookie then. Yet, he needed merely six games to defeat the Russian supremo Alexei Dreev eight-game match against of Russia in. 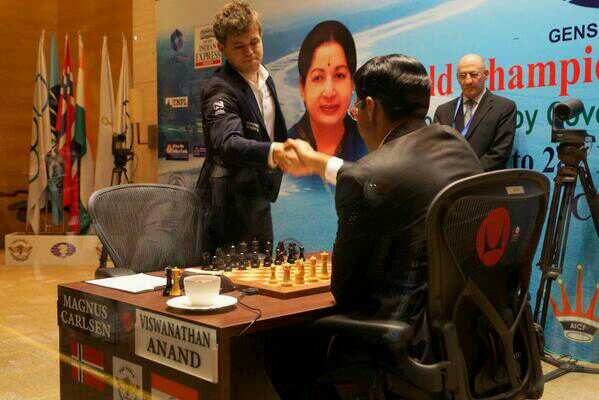 Most experts and players believe that hosting this match in India would provide a huge boost to the Chess circuit in India. A plethora of celebratory events were organised before and during the match.

“This is the 4th instance in the history of competitive chess that a World Championship is being held in Asia. In a celebratory build up to it, we organised tournaments in public parks, tournaments for the elderly etc. Awareness drives were carried out amongst school children between the age of 7-17 years.” Said V Hariharan,the General Secretary of Tamil Nadu State Chess Association (TNSCA).

The city of Chennai was drenched in posters and large cut-outs of chess pieces. Right from the railway station to the airport to public parks – the buzz was everywhere. The local city lad/boy ‘Vishy’ was gearing up to take on the young Norwegian prodigy Magnus Carlsen.

Probably the most notable of these celebratory events was a tournament held for the Visually-impaired. The heights that Chess in India has scaled to was evident from 87 participants from all districts of Tamil Nadu.

“When I started chess , there was not a single rated braille player in Tamil Nadu. Today, there are five,“ said Sai Krishna the top-rated player in the tournament (FIDE 1768)

The state of Braille Chess in India is good, but Indian players are yet to find their feet on the global circuit. Tournaments and initiatives like these go a long way in the growth of the sport.

This example amply puts light on Anand’s contribution to Chess in India. It also highlights that sports other than Cricket do have a future in India.

Also, this is the first time that a chess match was telecasted live. This was received openly with the High TRPs being a indicator.

“Even people who are not Chess players are watching the match now. We now have hope that we can take the game to the masses,” said Grandmaster (GM) R B Ramesh on being asked how beneficial this match would be to the game of Chess.

Vishwanathan Anand is just a week away from turning 44, Carlsen on the other hand is half his age and is already the Highest rated player ever.

I know India and Anand’s fans are mourning, but this is also a time to celebrate him as a great champion. He lost but he is not dead!